The Future of Wood Rain Screen Siding Is Here. 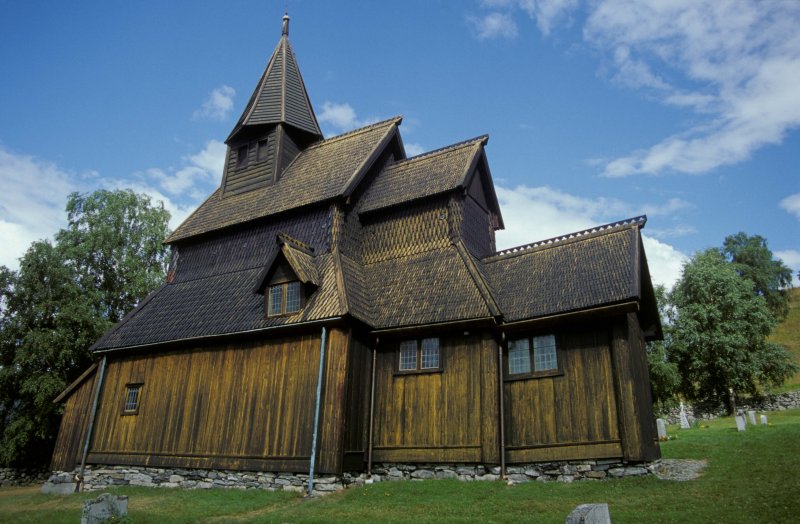 The rainscreen principle is not new, nor is the idea of rainscreen applied to wall design. For centuries in Norway, the rainscreen idea was intuitively used, without any scientific, systematic foundation. They utilized drained and back-ventilated claddings with both closed and open joints. On buildings with timber claddings, closed joints were adopted, and openings at both the top and bottom of the cladding allowed for drainage and evaporation of any penetrating rainwater. The Norwegians titled this approach the "open-jointed barn technique," since originally it was used in conjunction with the construction of barns. [1]

It wasn't until the 1940's that research organizations began delving further into the principles behind rainscreen, and recognizing the superiority of a rainscreen system: "It is clearly unwise to allow walls, whether of brick or porous cement, to be exposed to heavy rain. They absorb water like a blotting paper and it would therefore be a great step forward if an outer, water repelling screen could be fitted to brick walls, with satisfactory characteristics from the point of view of appearance, mechanical strength, and cost. This screen could be applied so that water vapor coming from within is automatically removed by ventilation of the space between the wall and the screen." [2]

Norway is the place where rainscreen cladding had its birth. It was not a scientific breakthrough, however, but more a gradual discovery that happened centuries ago in a largely intuitive way. Norwegian builders, probably through trial and error, found a way to utilize drained and back-ventilated cladding with joints that were both closed and open.

The first buildings to have this type of cladding were large barns. This is why they called it “the open-jointed barn technique.” The timber cladding had closed joints with opening at the top and at the bottom of the timber to allow for water drainage, and also for the evaporation of any rain moisture that managed to penetrate inside.

Scientific research of the underlying principles of a rainscreen didn’t start until as late as the 1940's. It was quickly recognized that the principles involved in rainscreen cladding was vastly superior to anything else in use at the time. That still holds true today.

The early research concluded that it is unwise to allow walls made of brick or cement to be exposed to rain over a long period of time without having anything to prevent the porous nature of the materials from absorbing water in a way that is similar to blotting paper.

The idea of fitting an outer screen wall to porous brick and cement walls that could repel rainwater was adopted. It was also easy to make this screen aesthetically pleasing at the same time. Just because its primary purpose is to serve as a rainscreen, there is no reason why it can’t look good too. The outer screen also needs to have strength qualities and it needs to have an acceptably low cost. The design also needs to be such that it can, through proper ventilation, remove any water vapour that finds its way into the space between the wall and the cladding

The Telemark Loft is part of a three-project study that examines the beauty of wood. It demonstrates clearly that the natural and beautiful properties of wood can be long lasting. In fact after seven hundred years the Loft looks like it will be around considerably longer. See also the Glencoe Visitor Centre and Caledonian Forest sections.

"There is something sublime in the long darkness of these nothern nights, and the short intense snowy light of day suddenly breaking it for a few hours, and again all in darkness… He must have been a bold man who first inhabited a nothern latitude in winter." Samuel Laing from "Journal of a Residence in Norway", 1834. London 1851.

The Telemark loft is a wonderful example of how natural wood can delight. The main loft house on the left has been around for over 700 years, has been taken apart, moved, reassembled and lifted off the ground the past few hundred years, but still survives as a wonderful example of the durability, and charm of untreated wood. This loft from Sondre Tveito farm in Hovin, Telemark, Norway is dated from around 1300 is also an excellent example of medieval architecture. The Telemark region extends between the Oslo fjord on the south of Norway to the Hardanger plateau. Famed for it's traditional, world renowned style of skiing and rugged landscape it is typical in Norwegian terms for the way the populations settled and spread. Telemark was an example of what the 18th century French philosopher Montesquieu meant when he said that "the source of freedom in Europe" was to be found in Scandinavia. Unlike other countries, Norway's geography made it unsuitable for any overall power to dominate so when the Monarchs became powerful in other parts of Europe, the real power in Norway lay with the local communities. The vast tracts of sparse land held apart by mountainous terrain and long deep fjords and forests enabled real communities to develop and spread throughout the land. Most farms belonged to the families and special allodial laws developed that allowed them to keep the ownership throughout the generations. Unlike many other parts of Europe where large controlled areas could be uprooted and erased, the surviving cultures in Norway are still to be found more or less intact after so many years. It is for this reason that we can still look in awe at the durability of the wooden structures after 700 years, and realise just how good wood is as a material to build with.

The use of small buildings with their own function was introduced during the Viking Age. The Loft and Stable shown are part of a grouping of buildings that make up the farmstead (tun) and are arranged in a square. This is known as the square tun and was the most common type in recent times. Recent times because, although the loft dates from around 1300 AD, the courtyard was added to over the centuries. The square plan was a fairly recent development that replaced other layouts for example the much older row tun that relates to the prehistoric longhouse. The buildings are arranged in the tun as 'innhus'( to one side), where the living, food storage (bur) and sleeping are placed, and 'uthus' (on the other side), where the animals and general storage were housed.

The detailing around the door is influenced by medieval church art that helps to date the loft to around 1300 AD. The detailing was then highly colored with yellow ochre and rust red pigmented paint, traces of which can still be seen.

The door on the lower level, leads to the bu where food was stored. It was painted with tar crosses to protect the contents. The simple stair to the right leads to the gallery above where valuables, for example textiles, were kept. There is also a bed dating from medieval times and was used as a guest room in summer.

The upper gallery of the loft is lit by three small openings with simple carvings and detailing. This would provide the main source of daylight and ventilation to the sleeping area. This later loft and bur from Rofshus in Telemark, built in 1754, also stand in the traditional Telemark style side by side. The log construction was introduced to Norway from Finland and Russia during the Viking Age and has improved over the ages. The corner detail, the way the logs were held together, developed over time to ensure a tighter fit with the long grooves being lined with moss to keep out the wind. In the Telemark region the use of enormous logs became a status symbol in the 1600's. The larger the logs the more prosperous were the inhabitants. The loft was traditionally the most prestigious building on the farmstead, it's style and construction however, changed very little over the years. There are very few differences between this example and the previous one at the Sondre Tveito farmstead despite being built some 450 years apart.

With the introduction of panelling, the detailing of the logs was greatly simplified as the logs were hidden from view and also protected more from the elements. The carvings on the panels however, became more elaborate as can be seen from this example. Being the most prestigious building, the loft's panels were decorated with great care. These carved floral motives were done in 1754 AD, the date being scribed above the door.

This single storey house has had it's logs hewn to give a tighter fit. The rooms were generally very simply furnished with long benches and a long table, but allowed the family to comfortably carry out all their daily activities. This main room (stua) was where the family would cook, eat, celebrate, work and sleep. Norwegian's used birch bark on the roofs to keep out the rain and the snow. Birch bark is waterproof and has a very long life and can withstand wet conditions. It is however, a very lightweight material and requires something a bit heavier to hold it in place. The most common and easiest material was turf that also helped to insulate the roofs. This could be seen on the previous pages. The photograph below shows an example of a birch bark roof held in place with timber boarding. Timber boarding in itself can be watertight and was sometimes used on its own. In other cases it was placed on top of turf to protect it and so help retain the heat. An interesting comparison can be found in the Glencoe Visitor Centre where a modern day interpretation by Gaia architects in Scotland designed a similar roof from untreated larch. (See menu below) The previous buildings can be found at the Norsk Folkemuseum in Oslo, which features 155 buildings. The buildings have been gradually added to the museum since it was established in 1894.

History of rain screen siding – Norway is the place where rain screen cladding had its birth. It was not a scientific breakthrough, however, but more a gradual discovery that happened centuries ago in a largely intuitive way. Norwegian builders, probably through trial and error, found a way to utilize drained and back-ventilated cladding with joints that were both closed and open. The first buildings to have this type of rain screen cladding were large barns. This is why they called it “the open-jointed barn technique.” The timber cladding had closed joints with opening at the top and at the bottom of the timber to allow for water drainage, and also for the evaporation of any rain moisture that managed to penetrate inside.

Scientific research of the underlying principles of a rain screen didn’t start until as late as the 1940s. It was quickly recognized that the principles involved in rain screen cladding were vastly superior to anything else in use at the time. That still holds true today. Green Aspects of Rain Screen Siding – Rain screen siding is considered a green building practice for two reasons. Utilizing a well designed rain screen vastly extends the life of your siding and minimizes thermal transfer.

By incorporating the rain screen principle into building design, siding will last considerably longer because moisture will never be trapped between your exterior cladding and exterior wall envelope. A longer life for your siding equates to less material consumption due to material replacement.

Rain screen systems also minimize thermal transfer by creating an air cavity behind the siding. This keeps the heat generated by sunlight on the outside of your house not allowing the heat to directly transfer inside -ultimately significantly reducing energy consumption and cooling costs.

2. Johansson, C.H. (1946). The influence of moisture on the heat conductance for bricks.